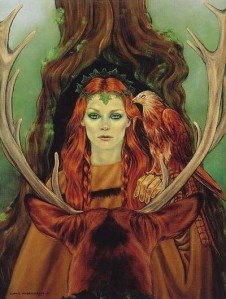 I don’t know who the artist is for this image, but I will gladly add the name if I learn it, or delete the image if the creator requests it.

Over breakfast today, an idea came to me; whether it’s something I came up with on my own, or whether inspired by the gods, I’m not certain. Nonetheless, it’s an excellent idea, so I’m going to go with it. It occurred to me, as I was munching my apple, that there’s so much about the deities I follow that I don’t know. More than that; there were plenty of deities within the pantheons I follow that I don’t know at all. Oh, I might know their names…but that’s it. And that’s simply not acceptable. Not to me, and, I suspect, not to Them. So. For the next 12 months, I will be working on a new project, so to speak. At least once a month, I will choose a deity from one of the pantheons that I follow and write a poem for Them. This gives me, at base, four weeks to write a poem, for a total of 12 new poems at year’s end. This is a goal that, between my depression and my health issues and my financial issues and my other responsibilities, I feel I can meet. Two poems a month/a poem every two weeks would be even better, and might be do-able if circumstances are kind. I won’t commit to that, because I know that they are NOT always kind, and I refuse to break this oath, but if it can be done, I’ll do it. (Divination on whether I should do two poems for the same deity, if I can manage two in a month, or whether I should do one poem for two deities? Answer: I got the rune Jera, harvest. I interpreted this to mean that the harvest would be greater if I’m honoring two deities in a month, rather than one. This is, after all, a way of introducing myself to those gods I don’t know, a beginning effort that will be fleshed out later on with more devotional work, such as offerings and libations; therefore, introducing myself to two gods instead of just one is a greater harvest. And since a harvest takes a year, and I have oathed to do this for a year/12 months…I don’t think I could ask for a clearer answer than that.) The initial rune I drew in divination when I first set out to ask whether I should do this was Berkano — rebirthing, new beginnings, receiving of offerings (“Taking Up the Runes”, Paxson, p. 180, paragraph 4, a paraphrase of a quote from Gundarsson). I think all those signify for the idea. So, I’ll start on Imbolc — February 1st — and since Imbolc is originally devoted to Brigid (whom I know well), I’ve chosen to go with an Irish goddess I don’t know for my first month: Flidais. When I’ve written the poem, I’ll post it both here and at my FB. It’ll also go into the growing collection that will eventually come out as my second poetry collection (though that is very likely a couple years into the future). Hail to the gods and goddesses! I hope You accept the fruits of this endeavor, which are meant to please and honor You!